When I read about PyLadies for the first time, my thoughts were a common knee-jerk: “separation is bad, dividing the community, …”. Like many of my privileged peers, I was pro-diversity but I thought this is the wrong way. My views changed over time and I filed it under “lessons learned”. Unfortunately, my old thinking patterns don’t cease to pop up in discussions, so I decided to share my perspective.

First, let’s get one thing out of the way:

Diversity is good for a community.

If we can’t agree on this fact, you can stop reading here. There are enough studies and blog posts that support this point and if you’re not convinced, this article isn’t for you1.

In this article, I’m using women as the IT minority in question. That’s because I live in Europe where women are the group that is most underrepresented in tech relating to their total number. One recent data point: ~51% of inhabitants vs. 8% EuroPython 2012 attendance. And that was an improvement by 100% compared to 2011.

That doesn’t mean I don’t care about other minorities. In the end, I’m an immigrant with working-class background myself. When I came to Germany, I was a kid with less-than basic language skills and grew up in a neighborhood that is considered ambition’s terminal destination.

But: working on increasing women’s participation isn’t hurting other outreaches. This is one of the most damaging straw men ever pulled. You care more about having more working-class Inuit albinos than about women? Great! Start an outreach program and if your proposal is sound, you may even get a grant from the PSF! Do you want more male nurses? Start an initiative! But stop blaming women for fighting their own fight!

So, why does the majority have problems with such outreach programs?

And why don’t we get it? Because most of us haven’t ever been in the shoes of a minority and virtually none of us has to endure their fate every day. It then takes just one aspect we don’t agree with – such as affirmative action or FEMEN demonstrations – to dismiss the whole topic.

I have neither experienced nor witnessed this problem. Therefore, it can’t be that big of a deal.

What we don’t realize, is that it’s our privilege to not experience discrimination.

The following tweet is a perfect example for our blindness for the problems that aren’t our own: 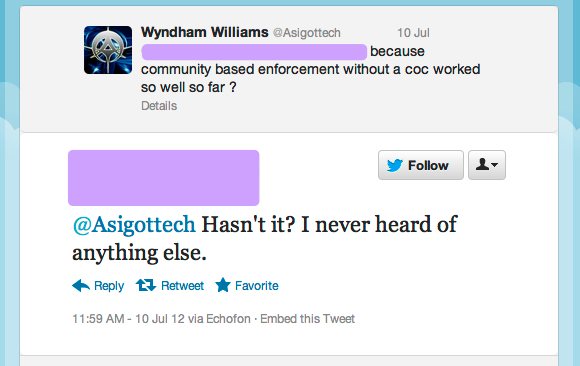 Yes, it worked for him! And other guys like us! Because EP consisted by 92% of us! And 96% the year before!

But if we genuinely want to change the ratio, we have to empathize with the other 8% and look how we can help them and be more welcoming.

I’d like to conduct a small thought experiment with you to help you understand. I used a similar one before and it worked, so I thought I share. It’s not scientific and I omit details, I just try to force-think you into a situation so you may start to see the point.

Imagine you’re a young white dude (chances are, this is the easy part). You happen to move into a perfectly mixed neighborhood: 50% blacks, 50% whites – we’ll keep it simple here. Your neighbors of both races like you and you like all your neighbors. Everything’s dandy2.

Now let’s add you love basketball and want to learn to play it. So, you get your ball on Amazon and head to the next court. A corner away you already see that you’ll be the only white dude on the court.

How does this make you feel?

Does it kind of feel repelling to come alone and be the only distinguishable person there? To be of a race that isn’t exactly well-represented in that sport? How comfortable would you be learning the basics with them?

What would happen if you make a stupid beginner’s mistake? Something like this? They won’t say it – they’re nice guys after all, and they like you. Maybe they even won’t think that. But you’ll always have this lingering feeling that they feel that way. That may even show by “gallantry” in the form that they go easy on you in games and you can tell that they never take you for full.

If there were more of people like you, maybe. But being alone? Hmm…isn’t the soccer field with all the white guys suddenly much more appealing? Maybe basketball isn’t that cool anyway…

Now you know one of the psychological barriers for women to attend tech get-togethers.

I haven’t even started about blatant sexism, male tendency to alpha-nerding, and general creepiness. If you want to witness that one first hand, I dare you: sit for a few hours next to a woman at a drink-up and watch people talk to her after some beers. Or worse.

One of Python’s pillars is that we value pragmatism over purity.

The “pure” solutions to this problem are to either wait until women “get over it” being humans that don’t like to leave their comfort zone. Or that we as a whole group stop being creepy and start being more welcoming. It’s not enough that you are a nice guy because one creepy or abusive person is enough to ruin an event for many.

It’s evident that the pure approach failed. So if we want more women at conferences and in tech in general, we have to look for pragmatic solutions elsewhere.

What is the pragmatic way? Let’s get back to our experiment. And let’s say you know some other white guys like you which you feel comfortable around and that are into basketball too. How about learning your ropes with them till you get comfortable and then you can join the main gang together? You’ll have enough skills to be accepted as a player and you won’t come alone. Double-Win!

Even after you’ve joined the rest, wouldn’t you appreciate to talk to other minority folks from time to time? Because the “others” won’t get some things you want to talk about as they never experienced it? It doesn’t even have to be problems either, it’s often just nice to talk to people with a similar perspective. You can observe this on vacation when you meet someone from your country. Isn’t it nice to talk to someone with a similar background from time to time?

Now, swap basketball for Python. What you’ve got are various Python outreach programs and women-only meet ups at conferences. Still finding them divisive and damaging?

Obviously, such outreach programs don’t divide our community. They incubate people which aren’t comfortable to cope with us from the beginning on and grow our community in the long term.

It doesn’t really matter whose fault the initial discomfort is. Whether they’re being over-sensitive (hint: they aren’t) or whether we’re a bunch of assholes (I know you aren’t). The facts are these: if we want underrepresented people to enrich our community, we have to look for pragmatic ways to get them in. Even so, if the methods don’t seem sound to us on the first sight to us.

“Yes, but…” discussions don’t help. PyLadies – and similar outreach groups – found a way that works. So be thankful to their organizers for doing this! And again: if you know of a better way, stop shitting on their approach and go for it! The world isn’t binary; the more approaches, the more diversity, the better.

That’s also how Code of Conducts work. Maybe you think we don’t need them because you’ve never been affected by harassment or discrimination. In that case, you should read this article about common incidents at DEF CON. This shit is happening today and everywhere no matter how hard you keep your eyes closed! An enforced CoC is the only way we can show people who fear this happening to them, that they are safe with us and that our care is for them genuine.

Let me stress the last point once more: most women that are at least a bit interested in tech heard about incidents at conferences with poor handling by the organizers. And when it comes to personal security, it doesn’t matter whether it were or weren’t Python conferences. For them, this is not an academic exercise. They are rightfully afraid for their own physical integrity – a feeling most of us hardly know. So you have to try to empathize, that they’ll prefer to err on the safe side. I know I would.

If they even witnessed or suffered such an incident the chances of them ever going to a conference ever again are rather slim. Same goes for seeing the ugly backlashes when someone dares to speak up. After all, I avoid situations which I expect to lead to unpleasantness too; and I’m a big, strong guy.

Every single conference claims that they’re nice folks and nothing ever happens. But that’s a lie we like to tell to ourselves. An enforced CoC is our firm promise to anyone who fears harassment that our turf is safe and if something happens, we will be there for them. That we will not leave them alone. And that we will not weasel around if the harassment isn’t a law violation or was technically not inside the conference venue. A community gathering needs much more than everyone abiding to the penal code and behaving only within the bounds of the venue.